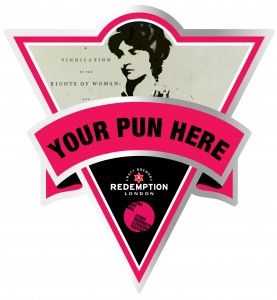 Beer and books go hand in hand, as we (and you) have shown in previous years. Which is why we are repeating the great ‘Name the Litfest Beer Competition’!

One of London’s very best brewers is Redemption, just up the road in Tottenham, who have been enthusiastic supporters of the festival since our first year. They’re going to be brewing us another unique, bespoke beer just for the festival, which will only be sold from our festival bars and a few handpicked local pubs.

And like last year, we’re giving you the chance to name that beer. Come up with something snappy and pithy, tempting and witty, and you will have the satisfaction of seeing your creation on the bar over the festival and sampling some free pints of it, courtesy of the lovely people at Redemption.

But competition is fierce! Every year your wit-wielding tactics never cease to amaze us, and so this year we’re pretty sure you’ll rise to the challenge. To celebrate the life and work of local Stoke Newington alumnus Mary Wollstonecraft, who pretty much invented feminism right here in N16, as well as welcome our favourite feminists Caitlin Moran and Suzanne Moore, we are brewing our first Feminist Beer. We’re sending some (female) Lit Fest worker-bees up to Redemption to help brew it, and have been promised a light, hoppy, summery ale for you to quaff with friends.

Previous winners have been Cask of the Red Death (the year we paid homage to former resident Edgar Allen Poe), Alexei’s Ale (Alexei Sayle, geddit?) and the John Cooper Clark-inspired Beersley Street. So if you think you’re punny enough, let the competition begin!