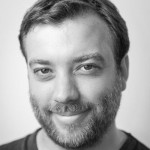 Joe is the Producer of the Radio 2 Book Club and is responsible for overseeing all book content on the UK’s most popular radio station. He chairs the committee that choose the Book Club titles and also produces and presents special book content for the Radio 2 Arts Show.

Joe has worked with many iconic broadcasters including Chris Evans, Sir Terry Wogan, Sara Cox, Ken Bruce, Claudia Winkleman and Steve Wright. He has also produced a number of special programmes for the BBC, including the Paper Cuts series with Kate Thornton.

Joe’s love for books began when he was 10. He was captivated by a poster for by Brian Jacques that was on the classroom wall. His parents took him to buy a copy from the local bookshop and he has not stopped reading since.
During his time running the Radio 2 Book Club, Joe has been responsible for championing many award-winning novels, including Nathan Filer’s , Terry Hayes’ and Emma Healey’s .

In 2014, Joe was one of the judges for the First Novel category of the Costa Book Awards.