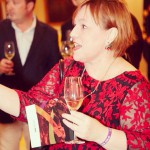 Rachel McCormack is the daughter of a Macallan drinker, Rachel was introduced to whisky via flu-alleviating hot toddies. At seventeen years of age she had a rude awakening in a Glasgow pub after asking for the house whisky and discovered that not all whiskies were the same. Her Father maintains to this day that he ruined her taste buds with quality malt at far too young an age. She would like to think he gave them a crash course in discernment. She is a regular panelist on BBC Radio 4s The Kitchen Cabinet since the first pilot. She has also broadcast on the station’s From Our Own Correspondent, the Food Programme and appeared as an expert guest on BBC Radio 2 on both the Simon Mayo show and the Chris Evans show. Her new