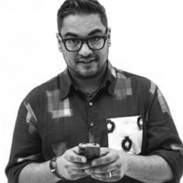 Nikesh Shukla is a writer of fiction and television.

His new novel, Meatspace, is out now and according to The Guardian, ‘Like Douglas Coupland’s Generation X, this novel captures a cultural moment.’ It’s out on The Friday Project. It’s been lauded by New Statesman, BBC Radio 4, The Independent on Sunday, and the Daily Mail. Which is funny, because they usually hate immigrants.

His debut novel, Coconut Unlimited was shortlisted for the Costa First Novel Award 2010 and longlisted for the Desmond Elliott Prize 2011. Metro described it as ‘…a riot of cringeworthy moments made real by Shukla’s beautifully observed characters and talent for teen banter’. In 2011, Nikesh co-wrote a non-fiction essay about the riots with Kieran Yates called Generation Vexed: What the Riots Don’t Tell Us About Our Nation’s Youth. In 2013, he released a novella about food, called The Time Machine , donating all his proceeds to Roy Castle Lung Cancer Foundation. This won Best Novella at the Sabotage Awards.

His short stories have been featured in the following places: Best British Short Stories 2013, Five Dials, The Moth Magazine, Pen Pusher, The Sunday Times, Book Slam, BBC Radio 4, First City Magazine and Teller Magazine. He has written for the Guardian, Esquire and BBC 2. He has, in the past, been writer in residence for BBC Asian Network and Royal Festival Hall.

He likes Spider-Man comics. A lot.