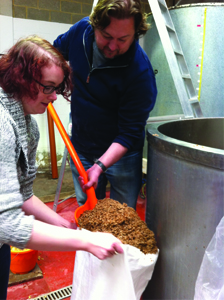 Fran beat off stiff competition in our competition to name the Stoke Newington Literary Festival 2012 ale. ‘Beersley Street’ is a tribute to (or bad pun on, if you prefer) one of the most famous works by our Saturday headline act, John Cooper Clarke.

We wouldn’t mind keeping a couple of runners-up (‘73 Shilling’? Makes sense if you’re Scottish. ‘You’re Bard’? As soon as we do some Shakespeare!) for future events. But armed with a name, Litfest went up to Tottenham yesterday to Redemption Brewery, festival sponsor, local hero and brewer of damn fine ale.

Redemption set up shop in Tottenham early in 2010, and have already made a reputation for themselves in London’s fast growing craft beer scene as awfully nice people, and brewers of excellent ale. Urban Dusk is a dark, malty delight, Trinity a shining, bright, golden ale whose flavour belies its very low alcoholic strength, and there are many more.

Beersley Street will be a 3.8% session ale, dry hopped for a fresh, aromatic flavour, the perfect beer to accompany what we hope will be a sunny weekend of literary frolics.

As you can see from the photos, genuine Litfest crew sweat went into this beer (not literally) – showing the lengths we’ll go to in order to bring you a perfect weekend!

The beer will be on sale in the bars run by the festival itself at our main venues – the Town Hall, Gallery and Abney Hall – and we’re hoping it will also crop up at pubs such as the Jolly Butchers – another festival sponsor. It will take its place alongside other quality drinks, which help us break even as a festival and ensure our financial viability. So thanks to all ours sponsors. Drink more Redemption beer. Buy pints of it for your friends. (And do remember to drink responsibly, of course…)