We’re very fond of beer at Stoke Newington Literary Festival, and judging by how busy our bars are, so are you.

London is undergoing a brewing revolution, with 24 breweries now operating in the capital – up from just two five years ago. And some of the best beer pubs are right here in Stoke Newington.
Beer and books go together perfectly, as we have shown in previous years. Which is why we are repeating the great Name the Stokey Litfest Beer Competition!

One of London’s very best brewers is Redemption, just up the road in Tottenham, and they’ve been an enthusiastic supporter of the festival since our first year. This year, like last year, they’re going to be brewing us a unique beer just for the festival, which will only be sold from our festival bars and a few handpicked local pubs. 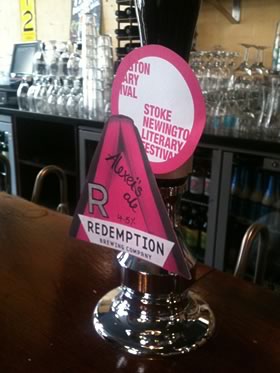 And like last year, we’re giving you the chance to name that beer. Come up with something snappy and pithy, tempting and witty, and you will have the satisfaction of seeing your creation on the bar over the festival. If you’re free, you will also be invited to come and help brew the beer, and we’ll also throw in some free tickets for the festival.

Last year one of our main strands was the life and work of Edgar Allen Poe (Cask of the Red Death, anyone?) This year we have more general themes, but we’ll be spending a lot of time talking about London, the nature of ‘the city’ in general, the impact and legacy of the Olympics. And beyond that, it’s just a great deal of literary fun and brain food in North London.

So send us your clever wordplay, your lame puns, your old jokes and burning witticisms. We are waiting for your input. Fame beckons.

The competition closes on Friday 4th May. Entries should be sent to info@stokenewingtonliteraryfestival.com or @stokeylitfest on Twitter. Judges’ decision is final, and no correspondence will be entered into, unless we feel like it.